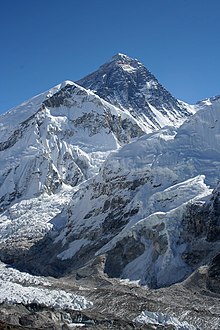 The top of Mount Everest is in the death zone.

The death zone is the name used by mountain climbers for high altitude where there is not enough oxygen for humans to breathe. This is usually above 8,000 metres.[1] Most of the 120 climbers who have died on Mount Everest, 8848 metres high, have died in the death zone.[1] At the top of Mount Everest there is only about one-third of the oxygen in the air that there is at sea level; a human could only be there for a few minutes before they became unconscious.[1] Climbers have to carry oxygen bottles to be able to reach the top. Visitors become weak and have inability to think straight and struggle making decisions, especially under stress.

Climber Lincoln Hall, who was left for dead on Everest in 2006, managed to survive. Lack of oxygen in his blood made it easier for him to get frostbite. He also had headaches, nausea and vomiting. He thinks he had cerebral oedema – or swelling of the brain. This is caused at high altitude when blood leaks into the brain itself. The swelling would have caused headaches, confusion and disorientation (not knowing where you are). This could kill a person if their brain became too compressed. Hall was left for dead when his breathing and heartbeat stopped. He was found the next day wandering near a cliff without his gloves or oxygen, and his climbing suit unzipped. [1]