Homosexuality in the militaries of ancient Greece 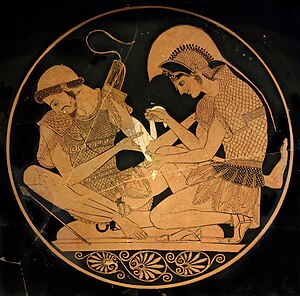 Patroclus and Achilles are sometimes regarded as lovers. What Homer intended is uncertain.

Homosexuality in the militaries of ancient Greece was regarded as contributing to morale.[1] The chief example is the Sacred Band of Thebes, a unit said to have been formed of same-sex couples. The Spartan tradition of military heroism has also been explained in light of strong emotional bonds resulting from homosexual relationships.[2] Various ancient Greek sources record incidents of courage in battle and interpret them as motivated by homoerotic bonds.

Some Greek philosophers wrote on the subject of homosexuality in the military. In Plato's Symposium, the interlocutor Phaedrus commented on the power of male sexual relationships to improve bravery in the military:[3]

... he would prefer to die many deaths: while as for leaving the one he loves in a lurch, or not succoring him in peril, no man is such a craven that the influence of Love cannot inspire him with a courage that makes him equal to the bravest born

However, the Symposium is a dialectical exploration of the nature of true love. Phaedrus' views are soon found to be inadequate compared to the transcendent vision of Socrates, who:

"...seizes this favourable moment in the talk at Agathon's party to suggest that visible beauty is the most obvious and distinct reflection in our terrene life of an eternal, immutable Beauty, perceived not with the eye but with the mind. He preaches no avoidance of the contest with appetite, but rather the achievement of a definite victory over the lower elements of love-passion, and the pursuit of beauty on higher and higher levels until, as in a sudden flash, its ultimate and rewarding essence is revealed."[4]

Xenophon did not criticize the relationships themselves. He ridiculed militaries that made them the sole basis of unit formation:[5][6]

they sleep with their loved ones, yet station them next to themselves in battle ... with them (Eleians, Thebans) it's a custom, with us a disgrace ... placing your loved one next to you seems to be a sign of distrust ... The Spartans ... make our loved ones such models of perfection that even if stationed with foreigners rather than with their lovers they are ashamed to desert their companion.

According to tradition, the Greeks structured military units along tribal lines. This was a practice attributed to Nestor in the Homeric epics. The Theban military commander Pammenes, however, is supposed to have advocated military organization based on pairs of lovers:[7]

Homer's Nestor was not well skilled in ordering an army when he advised the Greeks to rank tribe and tribe ... he should have joined lovers and their beloved. For men of the same tribe little value one another when dangers press; but a band cemented by friendship grounded upon love is never to be broken.

Plutarch himself appears to doubt the veracity of these accounts. It is to be doubted if Pammenes actually organized military units along homosexual lines.[8] Eventually the Greek city-states joined Pammenes' views on the most effective order of unit formation. The practice soon proliferated. City-states that had originally frowned upon the idea reversed opinions on the basis of their own experiences.

One such example is supposed to have taken place during the Lelantine War between the Eretrians and the Chalcidians. The account is given by Plutarch in a dialogue.

In a decisive battle the Chalcidians called for the aid of a warrior named Cleomachus. Cleomachus answered their request. He brought his lover along with him. He charged against the Eretians and brought the Chalcidians to victory at the cost of his own life. It was said he was inspired with love during the battle. Afterwards the Chalcidians, erected a tomb for him in their marketplace. They reversed their negative view of homosexuality, and began to honor it.[9] The fundamental point seems to be that the superiority of heterosexual love does not imply condemnation of homosexuality.[10] Aristotle attributed a popular local song to the event:[11]

Ye lads of grace and sprung from worthy stock
Grudge not to brave men converse with your beauty
In cities of Chalcis, Love, looser of limbs
Thrives side by side with courage

The importance of these relationships in military formation was not without controversy. According to Xenophon, the Spartans abhorred the thought of using the relationships as the basis of unit formation for placing too much significance on sexuality rather than talent. This was due to their founder Lycurgus who attacked lusts on physical beauty, regarding it as shameful. Xenophon asserted that in some city-states the lovers would not even have conversations with one another. He said this type of behavior was horrible because it was entirely based on physical attractions:[12][original research?]

If as was evident it was not an attachment to the soul, but a yearning solely towards the body, Lycurgus stamped this thing as foul.

Nonetheless city-states that employed the practice in determining military formation enjoyed some success. The Thebans are said to have had one such regiment as the core of their entire army. They attributed this group called the Sacred Band of Thebes for making Thebes the most powerful city-state for a generation until its fall to Philip II of Macedon. Philip II of Macedon was so impressed with their bravery during the battle he erected a monument that still stands today on their gravesite. He also gave a harsh criticism of the Spartan views of the band:[13]

Perish miserably they who think that these men did or suffered aught disgraceful.

One of the prominent Greek military figures enjoying such a relationship was Epaminondas, considered the greatest warrior-statesmen of ancient Thebes by many, including the Roman historian Diodorus Siculus. Diodorus however does not have anything to say about the sexual orientation of Epaminondas or the Sacred Band, nor does he say anything about the following account, again from Plutarch (Amatorius 17). According to Plutarch dramatic dialogue, Epaminondas had two male lovers: Asopichus and Caphisodorus, the latter died with him at Mantineia in battle. They were buried together, something usually reserved for a husband and wife in Greek society. Plutarch, consistently with his heterosexual message, then goes on to tell how love also inspires women to great courage: "And here, methinks, we have very opportunely mentioned Alcestis; for although the temper of women has little to do with Mars, Love many times drives them to daring attempts beyond their own nature, even to death."