Michigan Stadium is an American football stadium in Ann Arbor, Michigan, United States. The Michigan Wolverines play there. It is the largest stadium in the United States and the third largest in the world.[5] Officially, the stadium can hold 109,901 people.[6]

Michigan Stadium is used for events besides Wolverines games. The University of Michigan graduation ceremonies are held there every year. The 2014 NHL Winter Classic hockey game was played there. That was a regular season National Hockey League game between the Toronto Maple Leafs and the Detroit Red Wings. There were 105,491 people at that game, a record for a hockey game.[8] A 2014 International Champions Cup soccer match between Real Madrid and Manchester United was played at Michigan Stadium. There were 109,318 people at that game. That was a record for a soccer match in the United States.[9]

Before moving to Michigan Stadium, Michigan Wolverines played its games at Ferry Field which can hold approximately 40,000. Fielding Yost recognized the Wolverines need for a larger stadium after some expansions of Ferry Field. He said this stadium is too small for a team with a large number of supporters, and persuaded the regents to build a permanent stadium in 1926. Copied after the Yale Bowl, the original stadium was built and at first could hold 72,000. However, at Yost's request, stadium was expanded to 82,000.[7][10]

On October 1, 1927, Michigan played Ohio Wesleyan in the first game at Michigan Stadium, winning easily, 33–0. The new stadium was then formally opened three weeks later in a match-up against Ohio State Buckeyes on October 22. In front of the crowd of 84,401, Wolverines won again, 21-0. Five years later, they spoiled opening of Ohio Stadium in Columbus. In 1930, electronic scoreboards were installed, making the stadium the first in the United States to use them to keep the official game time.[7]

In 1956, the stadium was expanded to 101,001. The one "extra seat" in Michigan Stadium is said to be reserved for Fritz Crisler, sports director of University of Michigan at the time.[11] Since then, all official Michigan Stadium capacity figures have ended in "-01", although the extra seat's location is not specified.[7]

On September 9, 2006, spectators of Michigan's football game against the Central Michigan Chippewas was delayed due the bad weather conditions at the first time in stadium's history after lightning struck nearby during the first quarter and play was suspended for approximately one hour.[15] Michigan's game versus Ball State University team on November 4, 2006, was the 200th consecutive crowd of over 100,000 fans.[16] Traditionally, when the game's attendance is announced, the public address announcer (historically Howard King) thanks the fans for "being part of the largest crowd watching a football game anywhere in America today".[17] On September 3, 2011, Michigan and Western Michigan Broncos mutually agreed to end their game with 1:27 left in the third quarter because of an ongoing lightning delay. It was the first time Michigan had a football game called because of lightning. The stadium was evacuated at 6:38 p.m. and the game was called shortly after seven.[18] 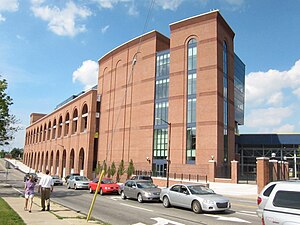 The new west side structure at Michigan Stadium, viewed from the southwest.

On June 21, 2007, the University's Board of Regents approved a $226 million renovation and expansion project for Michigan Stadium. The project included replacement of some bleachers, widening of aisles and individual seats, installing hand rails, and the addition of a new press box, 83 luxury boxes, and 3,200 club seats. The renovation plan garnered opposition from students, alumni, and fans around the country, which waned as the renovation neared external completion.[19]

A disabled-veterans group filed a federal lawsuit against the university on April 17, 2007, alleging that the design of the project did not meet federal standards for wheelchair-accessible seating.[20] On March 11, 2008, as part of the settlement terms of a lawsuit filed against the university pursuant to the Americans with Disabilities Act, the university announced that the official capacity of the stadium would be reduced to accommodate additional wheelchair-accessible seating beginning with the 2009 season.[21] The project was completed before the 2010 season.

Renovations in April 2008 caused that year's University of Michigan graduation ceremony to be moved to the Diag.[22]

In August 2011, the University completed a six-month scoreboard replacement project; the new boards measure 4,000 sq ft (370 m2) each with a resolution of 900 x 1632. The provider, TS Sports/Lighthouse, also installed new scoreboards in Yost and Crisler Arenas.[23]

Michigan Stadium was rededicated on September 4, 2010, before Michigan's first home football game of the 2010 season against the Connecticut Huskies,[24] with a listed capacity of 109,901.[6] After the renovation, the stadium lacked permanent lights, although platforms for temporary lights were included in the design. In September 2010, a few days after the rededication, the University of Michigan's Board of Regents approved a plan to add permanent lights, at a cost of $1.8 million. The lights were first used at the men's hockey game on December 11, 2010. The following season saw the stadium's first night football game on September 10, 2011. The Wolverines defeated the Notre Dame Fighting Irish football team 35–31.[25]

Since 2011-12 season a Michigan Wolverines lacrosse team play here too.[26] The team will play most of its 2012 games in Michigan Stadium, including a match against Ohio State on April 14, 2012, after the annual Wolverine football spring game.[27]

The stadium's original capacity was 72,000, but Fielding Yost made certain to install footings that could allow for expansion up to 200,000 seats. Initially, all seats consisted of wooden bleachers. These were replaced with permanent metal seating in 1949 by Fritz Crisler, athletic director at the time. From 1927 to 1968, the stadium's field was covered in natural grass. This was replaced with TartanTurf in 1969 to give players better plaeind conditions. However, this surface was dangerous for easy-injuried players, and the stadium returned to natural turf in 1991. This too became problematic, as the field's below-surface location near the water table made it difficult for grass to permanently take root. The field was converted to FieldTurf, an artificial surface designed to give grass-like playing characteristics, in 2003.[28] In 2010, it was upgraded with a brighter and higher quality version of field turf called Duraspine.[29]

On September 7, 2013, Michigan Stadium drew its largest attendance for a football game to date. A 115,109 people saw Michigan Wolverines victory over Notre Dame Fighting Irish 41-30, setting a post-1948 NCAA football attendance record. Probably a 1927 Notre Dame–USC game at Soldier Field in Chicago, before to NCAA record keeping for attendance, was seen by approximately 117,000–123,000 people.[30][31][32] Michigan Stadium also holds the current NCAA single-season average home attendance record, which was set in 2011 at 112,179 fans per game and topped in 2012 at 112,252 fans per game.

With an attendance of 104,173, the ice hockey game between Michigan Wolverines and Michigan State Spartans (victory of Wolverines 5-0) set the record attendance for a hockey game.[33] The record was broken on January 1, 2014 for the NHL's 2014 Winter Classic, where a crowd of 105,491 saw the host Detroit Red Wings fall to the Toronto Maple Leafs in a shootout 2-3.

On Saturday August 2, 2014, a sell-out crowd of 109,318 watched Manchester United defeat Real Madrid 3-1 in an International Champions Cup match.[34] The official attendance figure was the largest for a soccer game in the United States to date, beating the previous record set by the 1984 Olympics Gold Medal match, when 101,799 spectators saw France defeat Brazil 2-0 at the Rose Bowl in Pasadena, California.[9][35]