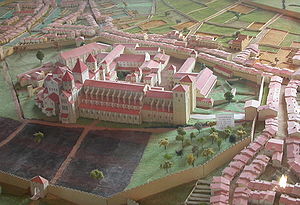 Model of the abbey of Cluny 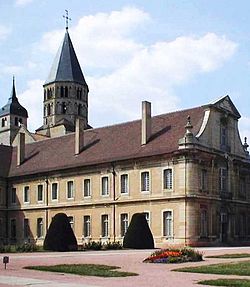 Coat of Arms of Cluny Abbey: "Gules two keys in saltire the wards upwards and outwards or overall a sword in pale argent".

Cluney Abbey is a Benedictine abbey in Cluny. It was built in Romanesque style and its three churches date rom the 10th to the 12th century. It was founded by William I of Aquitaine in the year 910. Soon the place was noted because it followed the Rule of St. Benedict more strictly than the place where the rule was developed, that is Subiaco in Italy. Cluny became the leader of a movement called monasticism. The abbey also started the Cluniac Reforms, and was subject only to the pope, Sergius III at the time. The Benedictine order was very important for the stability of f European society at the time.In 1790, during the French Revolution, the abbey was sacked, and mostly destroyed. Today, only very little of the original remains.

Dating around 1334, the abbots of Cluny had a townhouse in Paris known as the Hôtel de Cluny, what is now a public museum since 1833. Apart from the name, it no longer possesses anything originally connected with Cluny.

Help Improve This Page: Please contact us to become an approved KidzSearch editor and provide your credentials. Provide feedback on this article in our Cluny Abbey Forum