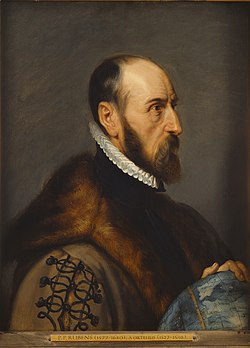 Abraham Ortelius (also Ortels, Orthellius, Wortels; 14 April 1527 – 28 June 1598) was a Flemish cartographer (mapmaker) and geographer. He is generally recognized as the creator of the first modern atlas, the Theatrum Orbis Terrarum (Latin: "Theatre of the Earth's Globe"). One of the founders and the notable representatives of the Netherlandish school of cartography in its golden age (the 16th and 17th centuries), he is also believed to be the first person to imagine that the continents were joined together before drifting to their present positions.[1]