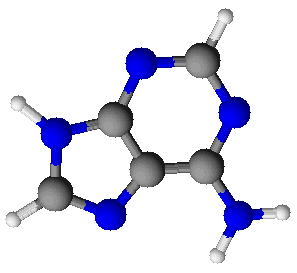 Adenine is one of the basic molecules which form DNA and RNA. They are usually called bases in genetics.

Adenine was sometimes called Vitamin B4, but no longer.[1] However, two B vitamins, niacin and riboflavin, bind with adenine to form the essential cofactors NAD and FAD respectively.

Some think that, at the origin of life on Earth, the first adenine was formed by the polymerization (joining) of five hydrogen cyanide (HCN) molecules. This is not generally accepted.[2]