Nepal's new constitution of 2015 has divided the country into seven provinces and removed the older Zones and Development region system. The new system has mostly kept old districts the same, and made very small changes on the boundaries of a few districts.

Nepal is divided into seven provinces. 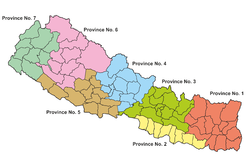 Seven provinces are divided into districts. There are 77 districts in Nepal.

Nepal was divided into gaupalikas in 2017. In English, they are called rural municipalities.[1] There are a total of 460 gaupalikas in Nepal.