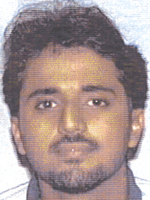 In March 2003, a provisional arrest warrant was issued calling him a "material witness". He was listed on theFederal Bureau of Investigation (FBI) on the Seeking Information - War on Terrorism list,[2] and since then United States Department of State, through the Rewards for Justice Program, has offered a bounty of up to US$5 million for information about his location.[1][3]

Media reports surfaced in 6 December 2014 indicating that he was killed in a manhunt operation by Pakistan in South Waziristan.[4]