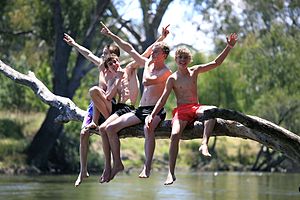 Teenage boy on the river

Adolescence is the time between being a child and a mature adult, that is the period of time during which a person grows into an adult, but are emotionally not mature. Adolescence in the English speaking world usually corresponds to the teenage years of 13-19 which are so named because of the end of the English words "thirteen" to "nineteen". [1]

The ages when one is no longer a child, and when one becomes an adult, vary by culture. In many cultures they are marked by rites of passage. The word comes from the Latin verb adolescere meaning "to grow up." During this time, a person's body, emotions and academic standing change a lot. When adolescence starts, in America, children usually finish elementary school and enter secondary education, such as middle school or high school.

During this period of life, most children go through the physical stages of puberty, which can often begin before a person has reached the age of 13. Most cultures think of people as becoming adults at various ages of the teenage years. For example, Jewish tradition thinks that people are adults at age 13, and this change is celebrated in the Bar Mitzvah (for boys) and the Bat Mitzvah (for girls) ceremony. Usually, there is a formal age of majority when adolescents formally (under the law) become adults.