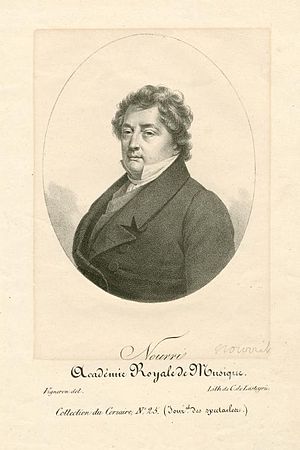 Adolphe Nourrit (3 March 1802 – 8 March 1839) was a French operatic tenor, librettist, and composer. He was born in Montpellier, Hérault. His father was an operatic tenor. Nourrit was almost 20 when he made his professional operatic debut in 1821 in Gluck's Iphigénie en Tauride. In 1826, he succeeded his father as the principal tenor at the Paris Opéra. He held the position until 1836. He became a pupil of Rossini, and created all the principal tenor roles in Rossini's French operas. In time, he gained considerable power at the Opéra. He was consulted by composers and his approval was sought for works in progress. He was appointed to the Conservatoire de Paris in 1827. He wrote many libretti for ballets at the Opéra, and, in 1832, he wrote the libretto for La Sylphide, the seminal romantic ballet. In 1836, he went hoarse during a performance at the Opéra and thereafter turned to salon recitals, introducing Schubert's songs to the salon audiences. He studied in Naples with Donizetti and made his debut in that city in 1838. His physical and mental health declined and in 1839 he committed suicide. He was buried in Montmartre Cemetery with his wife, who only survived him by a few months, dying in childbirth.