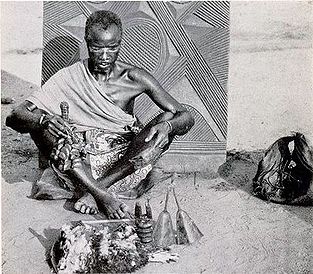 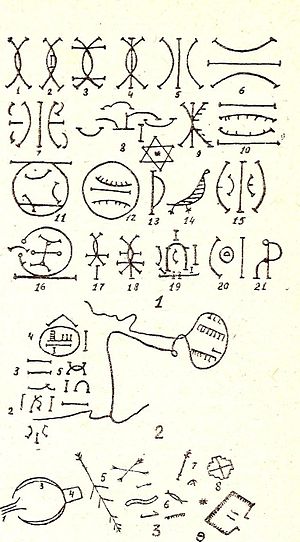 A script from Nigeria, which was originally used by a secret society to communicate

Traditional African religions are the traditions of the religious groups in Africa. After Christianity and Islam, they are the third-biggest religious group in Africa. These religions still stick to their traditions. They are folk religions, and combine different beliefs. In general, people in the cities confess to either Christianity or Islam. The people outside the cities confess to the traditional religions. These religions are omnipresent in everyday life. All that happens has a supernatural cause, rooted in religion. People are born with a certain religion. Normally conversions from one belief system to another do not take place. There is a central belief in a life force which links everyday life with the metaphysical. Generally, such religions are full of life, and have a low esteem for an ascetic lifestyle. There is also the fear of spirits, the dead, and of magic, which influence everyday life.