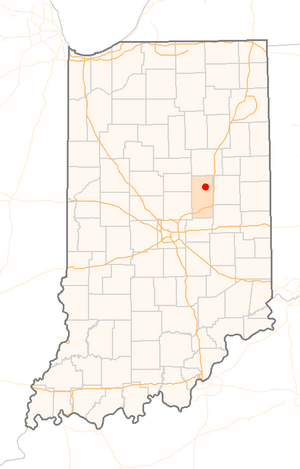 Alexandria is a city in the state of Indiana, in the United States. It was settled during the 1830's and 1840's by people who thought it would be linked by the planned 296 mile long Indiana Central Canal.[1] The canal was never completed, and Alexandria did not really grow until the discovery of natural gas in 1887.[1] The number of people living in the town grew from only 491 in 1887 to 7,221 in 1900.[1]

The world's largest steel mill was built, but the gas did not last.[1] The mill was taken down and moved without ever producing steel.

In 1943 the United States Office of War Information decided Alexandria was the typical American town.[1] It published a book about the town called “Small Town, U.S.A.”. This was to show what typical American people were like, how they lived, their beliefs and their values. Alexandria celebrates this choice with its annual "Small Town USA Festival."[2]