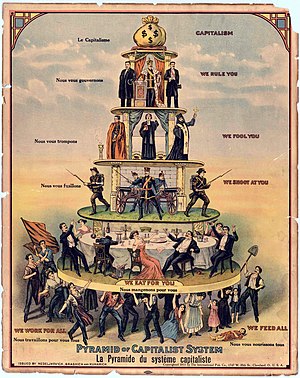 An Industrial Workers of the World poster (1911)

Anti-capitalism describes a wide variety of movements, ideas, and attitudes which oppose capitalism. Anti-capitalists, in the strict sense of the word, are those who wish to completely replace capitalism with another system; however, there are also ideas which can be characterized as partially anti-capitalist in the sense that they only wish to replace or abolish certain aspects of capitalism rather than the entire system.