Ariège (Catalan: Arieja; Occitan: Arièja) is a department in the region of Midi-Pyrénées in southern France; it is named after the Ariège river that flows through the department.

The department is surrounded by the French departments of Haute-Garonne to the west and north, Aude to the east, and Pyrénées-Orientales in the south-east, as well as Spain (Lleida) and Andorra in the south.

The department was inhabited in prehistoric times, as evidenced by the presence of caves with cave paintings and dolmens. In historical times it was inhabited by Basque people; they settled on the northern side of the Pyrenees and in the valleys below. In 415 it became part of the kingdom of the Visigoths, until their defeat at the hands of the king of the Franks in 507.

Ariège was created in 1790 during the French Revolution, when the whole of France was divided into departments, replacing the old provinces. Ariège was created combining the counties[N 1] of Foix (Languedoc) and Couserans (Gascogne).[3]

There are three main natural regions in the department:

Two main types of climate are found in Ariège: 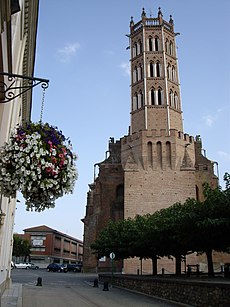 Cathedral of Saint-Antonin at Pamiers

The department is managed by the General Council of the Ariège in Foix. Argière is part of the region of Midi-Pyrénées.

There are 3 arrondissements (districts), 22 cantons and 332 communes (municipalities) in Argière.

The inhabitants of Ariège are known, in French, as ariègeois (women: ariègeoises).[7]

Agriculture is an important activity in the Midi-Pyrenees and Ariege. The Ariège is not the smallest department of Midi-Pyrenees but only a small part of its territory is used by farmers; only 132,110 hectares (326,451 acres), 27% of its total area, are used for agriculture in the Ariege.[8]

The Ariège plain is the most fertile area of the department; here farmers grow maize, wheat, sunflower and other crops. The other natural regions are not good for agriculture and are covered with forests or are used for pastures for sheep, cattle and horses.[8]

In the Ax valleys, the mining of talc is the most typical activity. This industry is supplemented by tourism for winter sports.

Arrondissements of the Ariège department