Multilingual plate at his birth place from the World Wildlife Fund. 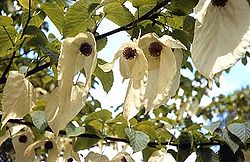 Father Armand David (September 27, 1826 near Bayonne –November 10, 1900 in Paris) was a Lazarist missionary Catholic priest as well as a zoologist and a botanist. He discovered many new species in China. The best-known of the animals he discovered are the Giant Panda and the Père David's Deer.