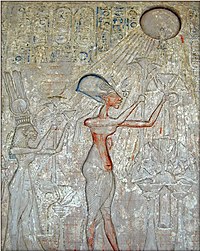 Pharaoh Akhenaten and his family adoring the Aten

Aten is the disk of the Sun in ancient Egyptian mythology, and an aspect of the Sun-god Ra. Aten was pictured as a sun with rays that ended in hands.

The deified Aten is the focus of the monotheistic religion of Atenism established by Amenhotep IV, who later took the name Akhenaten in worship and recognition of the Aten. In his poem Great Hymn to the Aten, Akhenaten praises Aten as the creator, and giver of life. Akhenaten was the first person to attempt to make a monotheistic religion.

The worship of Aten was eradicated by Horemheb.