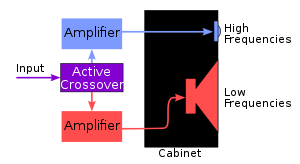 Audio crossover is an electric circuit that separates low and high audio frequencies in a signal. It is needed because very small loudspeakers (tweeters) would break if fed by low frequencies. Likewise, bigger speakers (subwoofers) are not able to play higher frequencies purely.