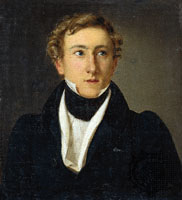 August Bournonville (21 August 1805 – 30 November 1879) was a Danish ballet master and choreographer. He studied in Paris as a young man. He became a solo dancer with the Royal Danish Ballet in Copenhagen. He became the company's choreographer from 1830 to 1877. He created more than 50 ballets. Only a limited number survive. It was only after World War II that his ballets became known outside Denmark.

His work is a link with earlier ballet traditions. He avoided the excesses of romantic ballet. He gave equal emphasis to both the male and female dancer. The extremes of human nature were tempered in his work and a more balanced picture of human nature emerged. His ballets include Napoli and The Conservatory.