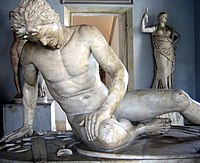 In Ancient Greece, the name βάρβαρος, bárbaros, was given to all those who did not speak the Greek language. Later, the term Barbarian came to mean 'Anyone who is not Greek'. Later again, it meant 'anyone who is outside the Roman Empire'.

In modern use, the word is used to refer to an uncivilized or uncultured person.