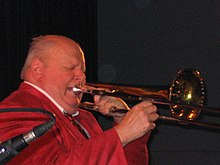 Big Bill Bissonnette (February 5, 1937 – June 26, 2018) was an American jazz trombonist, drummer, and music producer. He was born in New Orleans, Louisiana. In the 1960s, he led his own group, the Easy Riders Jazz Band, formed his own label, Jazz Crusade,[1] and organized northern tours for Kid Thomas Valentine, George Lewis, and Jim Robinson.

Bissonnette came in first place as "New Young Artist" in the 1965 Jazzology Jazz Poll. Over 30 years later he placed No. 5 among all jazz trombonists in the same poll.