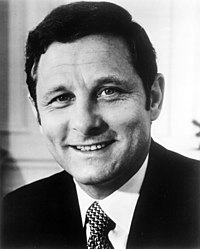 He ran for President of the United States in 1976, but lost to Jimmy Carter during the primary. He was known for co-authoring and introducing Title IX to the Senate.

Bayh authored the twenty-fifth and the twenty-sixth amendments to the United States Constitution. His is the only non-founding father to author two amendments. He also proposed to remove the electoral college and to ratify the Equal Rights Amendment.

Bayh's son, Evan, is a former Indiana governor and senator.

Help Improve This Page: Please contact us to become an approved KidzSearch editor and provide your credentials. You can also give immediate feedback in our Bayh Wiki Feedback Forum.