KidzSearch Safe Wikipedia for Kids.
Jump to: navigation, search
This page is about the chemical substance. For the manga and anime, see Bleach (manga). 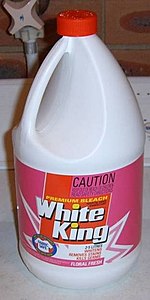 A bottle of commercial chlorine bleach

Bleach is the name for a number of chemical substances which can be used to remove colors, or to make things white. Very often, they act through oxidation. Bleaches on the base of sulfur have been in use for thousands of years. Modern bleaches are usually based on chlorine or on oxygen.

Many bleaches can kill bacteria easily. For this reason, they are often used for disinfecting or sterilisation.

Mixing bleach with some things commonly found at home, like vinegar or even fruit juice can produce chemicals like chlorine that are irritating or even dangerous. Bleach should also not be mixed with ammonia because a hazardous chemical reaction will occur. This effect can kill people.

Certain types of bleaches produce toxic waste. Some of them produce dioxins..[1]

Bleach made from hydrogen peroxide is used to make hair lighter in color, orange, blonde, or even white. It is often used by dark-haired people to make highlights, and most hair dyes contain it.