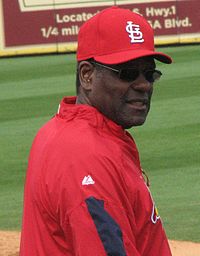 He was nicknamed "Gibby" and "Hoot" (after actor Hoot Gibson). Gibson totalled 251 wins, 3,117 strikeouts and a 2.91 earned run average (ERA) during his career. He was a nine-time All-Star and two-time World Series champion. Gibson's jersey number 45 was retired by the St. Louis Cardinals in 1975. In 1981, he was added to the Baseball Hall of Fame.

Due to Gibson's remarkable 1968 season, considered by some the greatest pitching performance, MLB decided to lower the pitching mound.

Gibson was born in Omaha, Nebraska. He was the father of three children: two with his first wife, Charline, and one with his second wife, Wendy.[1] He has one grandson, Max, born July 7, 2010.