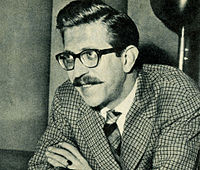 Bruno Canfora (Italian pronunciation: [ˈbruːno ˈkaɱfora]; November 6, 1924 – August 5, 2017) was an Italian composer, conductor, and music arranger. He was born in Milan.[1] He also composed songs for Rita Pavone, Ornella Vanoni, Shirley Bassey, and the Kessler Twins. His best known movie composition works are The Man Who Wagged His Tail, Fall of the Mohicans, and in Destruction Force. He was the Eurovision Song Contest conductor for the 1991 contest.