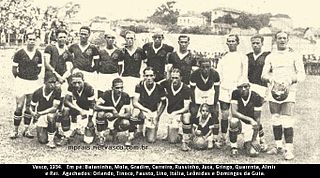 Team photo from the 1934 season

Club de Regatas Vasco da Gama is a football club which plays in Brazil. The club is probably passing through the worst period in its history, since in the last 12 years, Vasco has fallen to the second division of the Brazilian Football Championship four times.