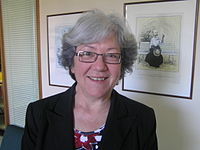 Dr Carmen Mary Lawrence (born 2 March 1948) was the 25th Premier of Western Australia from 12 February 1990 to 16 February 1993.[1] She was from the Labor Party. She became Premier after Peter Dowding resigned. She was the first woman to become Premier of an Australian state and she is Western Australia's only woman Premier. After she was Premier she became of member of the Australian parliament. She served as federal Health Minister from 1994 to 1996, under Paul Keating.