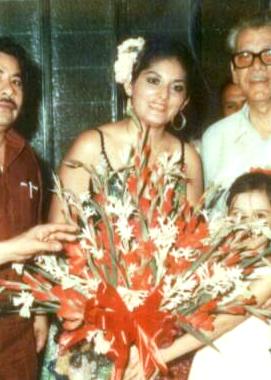 Chayito Valdez (born María del Rosario Valdez Campos; May 28, 1945 – June 20, 2016) was a Mexican-born American singer and actress. She was born in Guasave, Sinaloa. She was sing about folk music of Mexico.

In the early 1970s she recorded four songs the Sinaloan city of Los Mochis: "Besos y Copas", "Una Noche me Embriagué", "Una Sombra" and "Amor que Muere", which earned her a reputation as a Mexican folk singer. She won the fifth Festival de la Canción Ranchera with the song "No me pregunten por él". She was also an actress, who appeared in the movie Zacazonapan.

Valdez moved to Los Angeles, California in 1982 and became a US citizen. On September 17, 1985, she suffered an automobile accident that left her in a wheelchair.

Valdez died from complications of a cerebral hemorrhage in Coronado, California on June 20, 2016, aged 71.