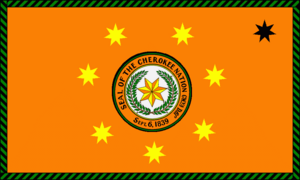 The Cherokee (ah-ni-yv-wi-ya in Cherokee language) are Native Americans who at the time of European contact in the 16th century lived in the area that is now the eastern and southeastern United States before most were forcefully moved to the Ozark hills. They were one of the tribes referred to as the Five Civilized Tribes. 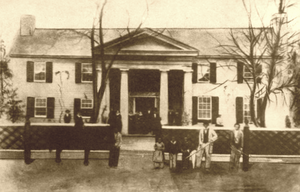 Cherokee people did not live in tepees. They lived in houses made from wood. In the 19th century, a man named Sequoyah introduced a form of writing the Cherokee language. For this, he was awarded a medal.

Chief John Ross was the leader of the Cherokee tribe from 1818 until 1867. He lived in Georgia before being forced to move to the place now called Oklahoma.

The Cherokee tribe had two chiefs, a red and white chief, who, when at war, the red chief would lead, and when there was peace within the tribe, the white chief would lead. There are more than one Chiefs but they each play a important part in their tribe.There are hunters,cooks,farmers,warfare,leaders,sewing,bulders,babysitters,warriors,CHIEFS,councils,count coup,fishers,cultivating corn,black smiths.