The Antarctic Treaty Freezed all the Antartic claims. 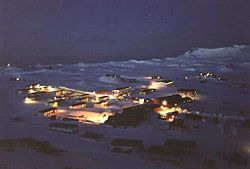 Night view of Villa Las Estrellas, the only civil settlement.

(P): Permanent; Are open all the year. (S): Seasonal; Are open in the Austral Summer.

Villa Las Estrellas is the only civil settlement in a Chilean Base, the other one is in Esperanza Base (Argentina) and it's called "Fortín Sargento Cabral"

The only permanent Chilean base on the Antarctic Peninsula is Base General Bernardo O'Higgins Riquelme. It has been working since February 18, 1948. It is located on Puerto Covadonga. 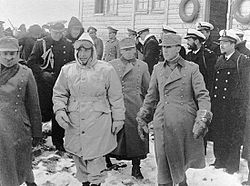 Gabriel González Videla inaugurating the Base General Bernardo O'Higgins Riquelme in Antarctica in 1948.