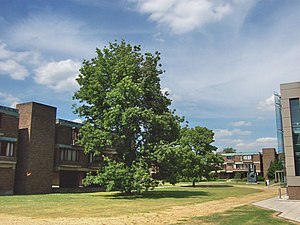 Churchill College is one of the colleges of the University of Cambridge, England. In 1958 a group of people was formed to get money to build a new college. This group had Winston Churchill as leader, so the college was named after him. It opened in 1960. Churchill College has more than 700 students, one of the biggest. Many of them study a science subject.

Churchill College was the first college in Cambridge to allow female students. This happened in 1972.