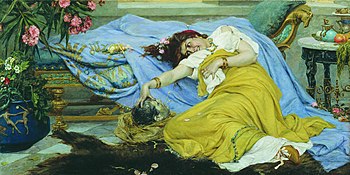 Marcus Tullius Cicero[1] (3 January 106 BC – 7 December 43 BC) was a Roman statesman, consul, lawyer, political theorist and philosopher. He is often thought to be one of Rome's greatest orators and prose stylists.[2][3]

His Latin is thought to be the model of Classical Latin. He introduced Greek philosophy to the Romans.

Cicero was heavily involved in the politics of the Roman Republic. After Julius Caesar's death, Cicero became an enemy of Mark Antony. In the power struggle, Cicero attacked Antony in a series of speeches. Cicero was proscribed as an enemy of the state by the Second Triumvirate. He was executed in 43 BC by soldiers working for the Triumvirate.