Clay animation is one of many ways to make a stop motion animation. Each animated piece, either character or background, can be formed and reformed into different shapes. People making a clay animation usually use something soft, like Plasticine clay. 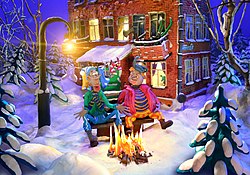 Most animation is made the same way, whether it is cel animation or stop motion. Each frame, or still picture, is recorded on film or digital media and then played back quickly. When played back at a frame rate of more than 10–12 frames per second, the human mind sees the series of slightly changing, rapidly playing images as movement. To us it seems as if the object is moving by itself. This way of tricking the mind into seeing "movement" is the way that all moving images work, from zoetrope to movies to videogames. The way CGI animations are made is different from the frame by frame method.

How it is done

In clay animation, each object is made in clay, usually around a wire skeleton called an armature. The object is put on the set (background) and a still picture (one frame of film) is taken. The object or character is then moved slightly by hand. Another picture is taken, and the object is moved slightly again. This is repeated over and over. To get the best results, special care is taken to make sure that each frame is the same as the one before. For example, the lighting has to be the same and the object has to be put back in exactly the right place. The only thing that should be different is the slight change the animator makes to the object.

Making a stop-motion animation using clay is hard work. Normal movies use 24 frames per second (frame/s). Animation usually uses "doubles" or "twos"; that is using two frames for each shot. This means that 12 changes are made for one second of movie. For a 30-minute movie, there would be about 21,600 stops to change the objects for the next frame. For a full-length (90-minute) movie, there would be about 64,800 stops. IF some of the parts were done with only a single, not double frame, there would be even more stops. Great care must be taken to make sure that the object is not moved by accident. For full-length movies, animators now use rubber silicone and resin-cast objects. One foam-rubber method has been called Foamation by Will Vinton.

Some famous clay animation movies have been made. Examples include: