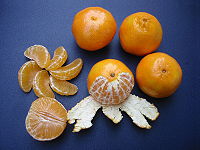 A clementine is a type of citrus fruit. It has a bright orange rind. They have a diameter of about 3 to 5 inches. Clementines are easy to peel and have no seeds. They are grown in California, and are usually available from November to January.

They were more popular outside the United States than inside, but in 1997, there were not many Florida oranges available because it was very cold. People bought clementines instead, which made them more popular. They are still popular today.

Clementines are popular in the winter months. They are usually found in wooden crates in the supermarket. A popular clementine brand is called Cuties.

They are named after a French monk, Père Clément Rodier, who lived in North Africa at the beginning of the 20th century. He either found a natural mutation of the mandarin orange, which he grew, or he created a hybrid of the mandarin and the Seville oranges. The fruit, however, may have originated long before in Asia.