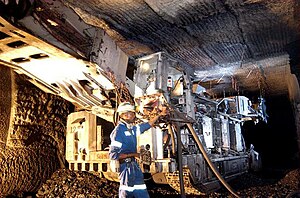 Coal mining is the process of getting coal out of the ground. It is part of the mining industry. Coal is used as a resource for making electricity.

Surface mining is done when the coal is near the surface. Coal miners remove the soil above the coal. The coal can then be removed without the coal miners having to go deep underground..

Underground mining is when the coal is farther underground, making it too expensive to remove soil. In this process, coal miners and all of the coal mining equipment are brought deep underground and coal is carried up out of the ground. This is especially dangerous because of fires, explosions, and poison gas in coal mines.

Before coal can be used, it must be processed in a coal processing plant. It is made smaller using a sizer and crusher. Parts that might be harmful to any equipment which will use the coal later on, such as the screening for metallic parts inside the mined coal.

Coal is delivered to customers in several ways. Trucks, conveyors, trains and ships transport coal to be used in factories and power plants.