The picture at the top shows an inert frame of reference, where the black object moves in a straight line. In the picture at the bottom the observer(red dot) sees the object follow a curved path, because of the Coriolis and Centrifugal effects 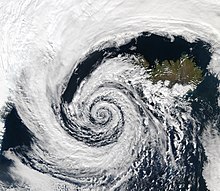 This storm over Iceland spins counter-clockwise due to balance between the Coriolis force and the pressure gradient force.

The Coriolis effect or force can only be observed from the perspective of a rotating object. For example, if you throw a ball off a spinning merry-go-round while sitting in the center of it, the ball will appear to move in a curve to the thrower since the merry-go-round is also moving. The direction of the curve will depend on the direction of the merry-go-round. However, from an outside observer, it will look like it is just moving in a straight line, since the only force is acting in a straight line. In a sense, the Coriolis effect is not a real force and just based on the observer moving. [2]