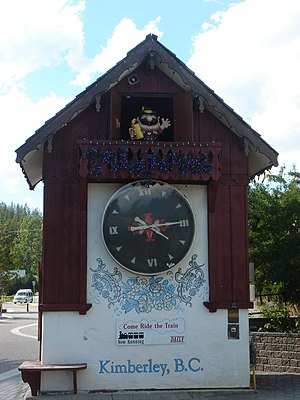 A cuckoo clock is a kind of clock. Cuckoo clocks have a case made of wood that looks like a small house. It gets its name because at the start of every hour, a small door on the clock open up and a little wooden bird comes out. The clock then makes a noise which sounds like a bird call ( "Koo-Koo" or "cuckoo").

The clock makes the sound one time for each hour it is, and there may also be a bell that rings when the sound is made. Whether it is morning or night does not change the number of times this happens.

Like many other clocks, cuckoo clocks can work using weights, springs, or electricity. Every clock is different, both in how it looks, how it works, and what it does. The sound of the "cuckoo" usually comes from bellows in mechanical clocks, or from a speaker in electric clocks. The clock may do more than just make this sound; some clocks also have figures that move around as music is played.

Cuckoo clocks are some of the best-known clocks that are made in the Black Forest, an area of south-western Germany and northern Switzerland.

Help Improve This Page: Please contact us to become an approved KidzSearch editor and provide your credentials. Provide feedback on this article in our Cuckoo clock Forum