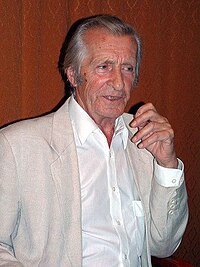 Czterdziestolatek or 40-latek (the English translation: a forty-year-old); broadcast in English by TVP Polonia. It was broadcasted under the title of "Being Forty". It is a Polish television comedy series which ran from 1974 to 1977.

It was very popular that it was continued and led to the release of a movie I'm a Butterfly, a 40-year-old's Love Affair and a New Year's Eve television program in 1975.

The series was written by Jerzy Gruza and Krzysztof Teodor Toeplitz and was broadcast on Telewizja Polska. In total, 21 episodes were made.[1]

The show was about a family in Warsaw who goes through midlife crisis, affairs, addiction, obsession with hair loss, efforts to maintain physical fitness, pride in achievements and professional life, society's role and health.