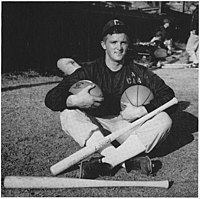 Joseph Daniel Talbott (November 1, 1944 – January 19, 2020) was an American football, baseball, and basketball player. He quarterbacked two seasons of football at UNC-Chapel Hill. He was named the ACC Player of the Year in 1966.

He was drafted 17th overall by the San Francisco 49ers before backing up quarterback Sonny Jurgensen for the Washington Redskins under Vince Lombardi. He also played baseball professionally in the Baltimore Orioles's minor league system.[1][2]

Talbott was born in Rocky Mount, North Carolina. He died on January 19, 2020 in Rocky Mount of cancer-related problems at the age of 75.[3]