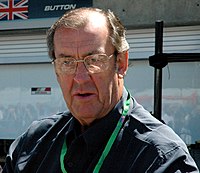 In 1969 Hobbs was included in the FIA list of graded drivers. This is an elite group of 27 drivers who were rated the best in the world by their achievements.[3]