Decapods are an order of crustaceans in the class Malacostraca. Many familiar groups, such as crayfish, crabs, lobsters, prawns and shrimp are in this order. Many decapods are scavengers – they eat dead plants and animals. Crabs are mixed feeders, taking algae and shellfish such as molluscs. Lobsters eat mostly live prey.

As their name suggests, all decapods have ten legs or, more correctly, appendages. The walking legs are the last five pairs of appendages on the front half of the body, the cephalothorax.[1] In many decapods, the front pair of walking legs carries large pinching claws. The claws are called chelae, so those legs may be called chelipeds.

The front three pairs of appendages on the thorax are used as jaws, and called maxillipeds.

On the abdomen are swimming appendages called pleopods, and the body ends in a tail fan.

Classification of the order Decapoda depends on the structure of the gills and legs, and the way in which the larvae develop. There are two suborders: Dendrobranchiata and Pleocyemata. Prawns (including many so-called "shrimp", such as the Atlantic white shrimp) make up the Dendrobranchiata. The other groups, including true shrimp, are the Pleocyemata.

The following classification follows Martin and Davis,[2] with some changes based on more recent structural and molecular studies.[3][4] 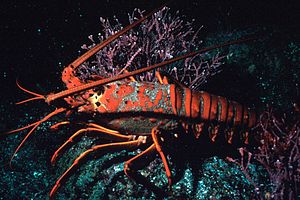 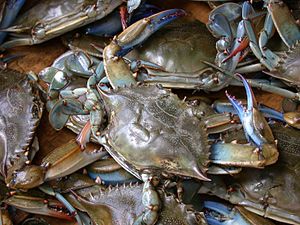 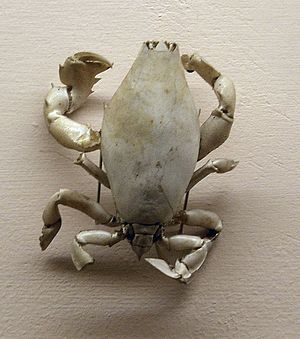 Order Decapoda Latreille, 1802 (Selection, not everything is listed)