Dili is the name of one of the 13 districts of East Timor, which includes the national capital Dili. The district is identical to that of the same in Portuguese Timor, with the only difference that it used to include the municipality (today district) of Aileu.

Dili is the smallest district in East Timor, but it has the highest population. It is the economic and political centre of East Timor. 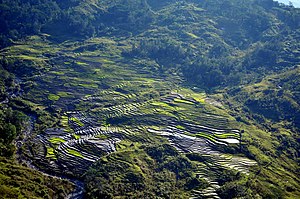 Mountains are close to the coast so that most of the landscape is mountainous. Near the western border is the Lake Tibar, one of the few large lakes of East Timor. Three small lakes with salt water are near Tasitolu and they have been named as Important Bird Area and also the entire island of Atauro.

A view of the city of Dili

The subdistrict with more people living there are Nain Feto, Dom Aleixo and Cristo Rei Veracruz. Atauro and Metinaro have less people living there. The average age is 20.8 years (2010), well above the national average of 18.8 [1]

Tetum, the official language, is the dominant language on the coast where the dialect Tetum Praça (a dialect with a great influence from Portuguese) is spoken; in the interior of the district and in Metinaro, the national language Mambai is often spoken.[4]