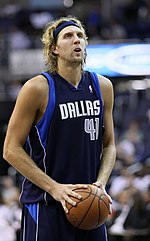 Dirk Nowitzki (born June 19, 1978 in Würzburg, Germany) is a German basketball player. He plays for the Dallas Mavericks in the United States' National Basketball Association's (NBA).

Nowitzki started playing in the NBA in 1998. He is only the second player who was born in Germany to play in the Finals.

He is a 10-time NBA All Star. Nowitkzi won the 2006-07 NBA Most Valuable Player (MVP) Award. The Mavericks, led by Nowitzki, defeated the Miami Heat 4-2 in the 2011 NBA Finals. In addition to performing very well in general in the Finals, his 101-degree fever in Game 4 didn't stop him from scoring the winning basket to tie the series 2-2. This amazing feat is a lot like when Michael Jordan played well despite the flu in the 1997 Finals against the Utah Jazz. Dirk's jersey number is 41.