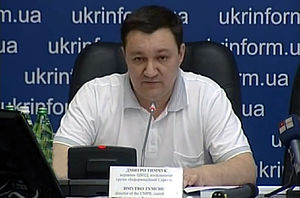 Dmytro Borysovych Tymchuk (Ukrainian: Дмитро́ Бори́сович Тимчу́к; 27 June 1972 – 19 June 2019) was a Ukrainian politician, military expert and blogger. He was born in Chita, Russian SFSR. He became one of the most popular Ukrainian online activists during the 2014 pro-Russian unrest in Ukraine. He was a founding member of the People's Front political party. He was a member of the Verkhovna Rada, Ukraine's parliament, from 2014 until his death in 2019.

On 19 June 2019, Tymchuk was found dead with a gunshot wound to his head in Kiev. According to police, Tymchuk was cleaning the gun when he accidentally fired it, killing him.[1]