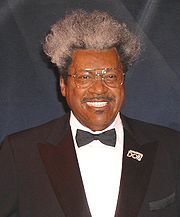 Donald "Don" King (born August 20, 1931) is an American boxing promoter who has promoted many famous boxer such as Mike Tyson, George Foreman, Muhammad Ali, Evander Holyfield, and many more.

King was born on August 20, 1931 in Cleveland, Ohio.[1] He dropped out from Kent State University. King was married to Henrietta King from 1959 until her death in 2010. They had three children.