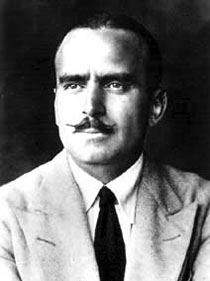 Douglas Fairbanks was a silent movie actor. He was born on May 23, 1883. He is best known for The Thief of Bagdad, Robin Hood, and The Mark of Zorro. He was a "swashbuckler" in the movies. A swashbuckler is an athletic, romantic hero. He married Mary Pickford in 1920. They lived in a Hollywood home called Pickfair. He was called "The King of Hollywood". His movie career went south when the "talkies" came along. Fairbanks was also a screenwriter, a director, and a producer. He was a founding member of both United Artists and the Academy of Motion Picture Arts and Sciences. He hosted the first Oscars Ceremony in 1929. He died on December 12, 1939. His son, Douglas Fairbanks, Jr. was also an actor.