Durham is a city in the North East of England. It is within the County Durham local government district, and is the county town of the larger ceremonial county. It lies to the south of Newcastle upon Tyne, Chester-le-Street and Sunderland and to the north of Darlington.

Durham is well known for its Norman Cathedral and 11th-century castle, and is home to Durham University. HM Prison Durham is also close to the city centre. Durham Castle and Cathedral is a UNESCO World Heritage Site.

Archeological evidence shows settlement in the area since 2000 BC.[1] The present city can clearly be traced back to AD 995, when a group of monks from Lindisfarne chose to settle there with the body of Saint Cuthbert, which had previously lain in Chester-le-Street.[2]

Before the Reformation the shrine of Saint Cuthbert, behind the High Altar of Durham Cathedral, was the most important religious site in England until the martyrdom of St. Thomas Becket at Canterbury.[2]

Despite a brief translation back to Holy Island during the Norman Invasion[3] the saint's relics remain enshrined to the present day.[4] Saint Bede's bones are also entombed in the cathedral, drawing the mediaeval pilgrim to the city.[2]

Durham’s geographical position has always given it an important position in the defence of England against the Scots.[5] The city has played an important part in the defence of the north and Durham Castle is the only Norman castle keep never to have suffered a breach.[6] The Battle of Neville's Cross which took place near the city on 17 October 1346 between the English and Scots was the most famous battle of its age.[1] 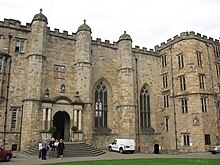 As the north east was so far from Westminster the bishops of Durham enjoyed extraordinary powers. They had the ability to hold their own parliament, raise their own armies,[2] appoint their own sheriffs and Justices, administer their own laws, levy taxes and customs duties, create fairs and markets, issue charters, salvage shipwrecks, collect revenue from mines, administer the forests and mint their own coins.[1]

Basically, William the Conqueror delegated many powers to bishops in the furthest reaches of England. They were his men, and most had fought at the Battle of Hastings. This style of delegation ran for many centuries afterwards. This applied especially in the north and west of England, which were several days ride from London.

So far reaching were the bishop’s powers that the steward of Bishop Anthony Bek commented in 1299 AD:

All this activity was administered from the castle and buildings surrounding the Palace Green.[2]

Every Bishop of Durham from 1071 to 1836 was a Prince Bishop except for the first Norman-appointed Bishop Walcher who was styled an Earl-Bishop.[1] The last Prince Bishop of Durham Bishop William Van Mildert[2] founded Durham University. Henry VIII cut some of the Prince-Bishop's powers and, in 1538, ordered the destruction of the shrine of Saint Cuthbert.[2]

The Prince Bishops also had their own court system, most notably the Durham Court of Chancery.[7] The county also had its own attorney general,[5] whose authority to bring an indictment for criminal matters was tested by central government in the infamous case of Rex v. Mary Ann Cotton (1832).[8] The courts and judicial posts for the county were finally abolished in 1873.

Composition of the Council

Liberal Democrats first took control of the council in the 2003 elections. Labour had held overall control of the City Council continually since the early 1980s.