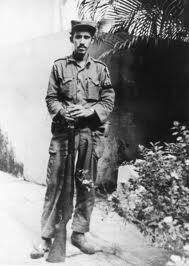 He was one of the band of Castro's active guerrillas that became known as the 26th of July Movement, named after the raid on Moncada Barracks on 26 July 1953. During the Bay of Pigs Invasion, on 19 April 1961, he commanded a battalion of about 200 police and militia moving south towards Giron, that was attacked by Brigade B-26s.