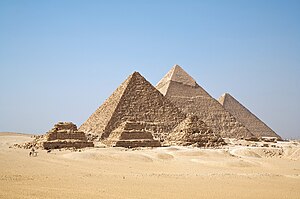 A view of the pyramids at Giza from the plateau to the south of the complex. From right to left are the Great Pyramid of Khufu, the Pyramid of Khafre and the Pyramid of Menkaure. The three smaller pyramids in the foreground are associated with Menkaure's pyramid.

The Pyramids of Egypt are among the largest structures ever built and are one of the most important examples of Ancient Egyptian civilization.[1] Most were built during the Old and Middle Kingdom periods.[2]

The following table lays out the chronology of the construction of most of the major pyramids. Each pyramid is identified through the pharaoh who ordered it built, their approximate reign and its location.