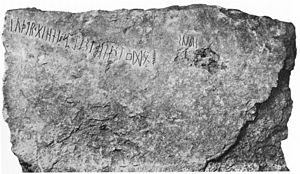 The oldest known row of runes in Elder Futhark, dated to the 5th century, on the Kylver Stone, in Sweden 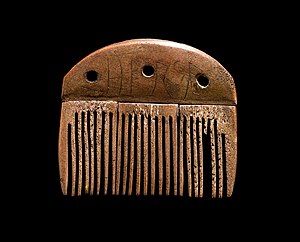 The comb found at Vimose

Elder Futhark is the oldest known runic script. It was used by Germanic tribes during the 2nd to 8th century. It consists of 24 different characters that are used like an alphabet; each character represents a sound or syllable. All Germamic tribes used the same form and same language. Its use lasted to the mid 8th century. Scholars are still discussing when it was first used: The oldest known use which is not disputed is a comb on the Vimose inscriptions from Denmark. It dates around the year 160. There are also runes on the Meldorf fibula, which date from the year 50. The inscription on the fibular is made of characters that are probably runes. The problem is that these characters can also represent symbols in the Latin alphabet.

Many of the characters from Elder Futhark resemble Latin or etruscan ones. For this reason, Elder Futhark had probably modelled form Southern Europe. The ordering of the Futhark letters is completely different from other known alphabets. In contrast, the ordering of the Latin alphabet is the same as the Greek one, which preceded it.de:Futhark#Das ältere Futhark sv:Futhark#Den äldre futharken