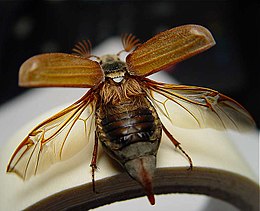 The elytra of this cockchafer (maybug) are readily distinguished from the transparent hindwings. 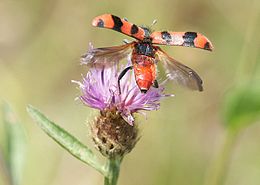 Elytra [1] are the modified, hardened front wings of beetles and some bugs (Heteroptera). In most true bugs, the forewings are called hemelytra, as only the basal half is thickened while the apex is membranous.

The elytra act as protective wing-cases for the hind wings underneath, which are used for flying. To fly, a beetle opens the elytra and then extends the hindwings, flying while still holding the elytra open, though some beetles in the families Scarabaeidae and Buprestidae can fly with the elytra closed.

In some groups, the elytra are fused together, and the insect is flightless. Some of the ground beetles (family Carabidae) are a good example of this.[2]